Honda VF and VFR INTERCEPTOR  (Whitehorse Press Collector Series)
ln the early 1980’s, Honda had built a reputation for setting the technological pace in
the motorcycle industry, and their introduction of V-four engines into the lineup was
meant to raise the bar once again.

The V45 Sabre and V45 Magna ushered in an entire generation of motorcycles
built around the narrower engine design. In 1983, the concept was transplanted into
the V45 Interceptor, an impressive sporting motorcycle that opened to rave reviews
in the motorcycling press. However, dark clouds soon began to gather on Honda’s
marketing horizon as the company dealt with the host of small technical problems
that seemed to plague their machine.

The story of the VF and VFR Interceptors is the storylof a great motorcycle built
on the shoulders of its outstandingly innovative, but flawed, predecessors. Honda’s
commitment to the V-four concept could have sunk a lesser company, were it not for
their tradition of fiercely independent thinking and near-religious zeal for quality.
Honda’s perseverance not only paid off in the end, it set new standards of
expectation among motorcycling’s sport-touring enthusiasts.

The Whitehorse Press Motorcycle Collector Series covers landmark motorcycles-
machines that have altered the direction of motorcycling and inspired loyalty among
their owners. 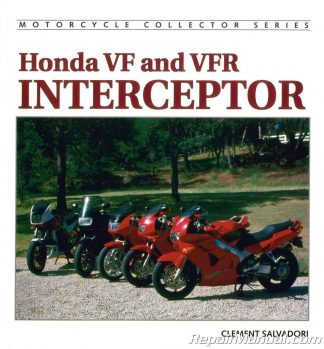