The Mustang and Capri have the conventional front engine/rear wheel drive lay- out. Various engines have been used over the long life of these models: A 2.3 liter four- cylinder, a 3.3 liter inline six-cylinder, a 2.8 liter V6, a 3.8 liter V6, a 4.2 liter V8 and a 5.0 liter V8. Some models are carbureted while others are equipped with fuel injection. Some four-cylinder engines are turbocharged. Power from the engine is transferred through either a four or five-speed manual or three or four-speed automatic transmission to the solid rear axle by a tubular driveshaft incorporating universal joints. Suspension at the front is a modified MacPherson strut design. The rear suspension features coil springs with trailing arms used to locate the axle. Rack and pinion steering is used, with power steering optional on early models and standard on later models. The brakes are disc at the front and drum at the rear (rear disc brakes are used on the Mustang SVO). Vacuum assist is optional on early models and standard on later models. 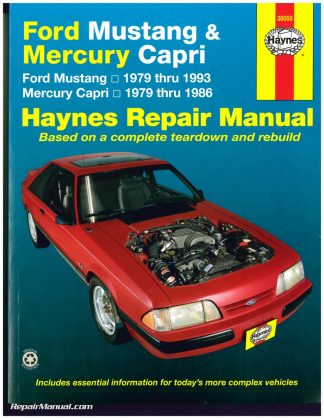