Ducati From the Clip-On Engine to the 916

Ducati From the Clip-On Engine to the 916

Ducati has consistently produced some of the fastest and most glamorous motorcycles in the world. Interestingly, the Bologna based manufacturer began its ascent as a producer of the Cucciolo (Little Pup), a 49cc engine that fit on ordinary bicycles.

From there the company blossomed and produced a steady stream engineering and race track successes. First came the Desmo in the late 1960s, followed by the V-twins in the 1970s, and the Paso, 851, and 888 of the 1980s. A succession of World Supermotorcycle and TT Formula 2 championships are just some of the titles Ducati racers have captured.

Mick Walker’s book, with its 120 color photos and incredibly well-researched text, vivdly brings Ducati’s greatest triumphs to life. Whether reading about the history and development of these spectacular motorcycles or just savoring the gorgeous color photos, Ducati fans will treasure this book. 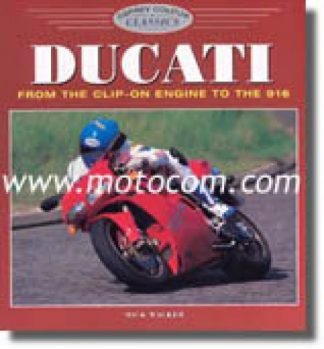