This Used 1986-1987 Motocourse The Worlds Leading Grand Prix And Superbike Annual covers the road racing better than any other publication.

This was the year which Eddie Lawson evolve into the great rider he had promised to be. Wayne Gardner had the entire weight of Honda’s World Championship effort placed on his shoulders and carried it to Three Grand Prix victories. Carlos Lavado proved himself the world’s fastest man on a 250cc and although accident-prone, he either destroyed the opposition or crashed out of the action himself, he was able to win when it mattered.

The old stars were there, Jean Francois Balde, Angel Nieto, and Boet Van Dulmen, but there were new names as well. Kevin Schwantz, Luca Cadalora, Ian McConnachie, Niall Mackenzie, and Steve Webster all produced Grand Prix performances to justify their inclusion as candidates for the World Championship honors. 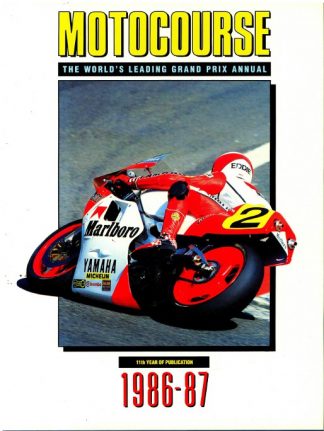 Since 1997 customers have chosen RepairManual.com for their repair information. Let us help you find a manual. Dismiss