This, 11 page,  Tillotson Diaphragm HD Series Carburetor Service Manual is a reproduction of the original out of print manual.  It was published to aid in understanding the construction, operation and servicing of Tillotson HD series carburetors. This book provides carburetor adjustment information along with starting operation, idling operation, intermediate operation, high speed operation, parts illustrations, how to clean and disassemble for cleaning and repair, and troubleshooting information.

The Tillotson diaphragm series carburetors have been adopted as standard fuel systems on chain saw, snow vehicle, and industrial engines throughout the world.

The HD series diaphragm carburetor has been developed by the Tillotson Manufacturing Company to make the advantages of a diaphragm carburetor available for use on larger engines having displacements of from 20 to 40 cubic inches per cylinder. The smaller carburetor features of construction simplicity, vibration resistance, tilt ability and easy servicing have been maintained and a more sophisticated fuel metering system has been added. It is available as a complete fuel system consisting of a carburetor, integral fuel pump and fuel filter for use on two stroke cycle engines, as a carburetor, integral fuel filter and optional positive action accelerating pump for use on four stroke cycle engines, or as a carburetor for use on two or four stroke cycle engines. The diaphragm controlled metering system allows precise fuel metering to the engine at extreme tilt angles and prevents fuel level changes due to vibration. The important feature of this part of the carburetor operation is that the amount of fuel going into the carburetor metering chamber is equal to the amount of fuel being used by the engine at any given time. There is no reservoir of surplus fuel to spill out of the carburetor. The dual venturi used in this model series multiplies the venturi pressure drop causing fine atomization of the fuel that is delivered from the main fuel nozzle. The fuel reaches the engine as a combustible fog instead of a fluid stream. This venturi system combined with the automatic power valve can produce increased power and fuel economy. These special additional features have maintained the dependability and easy servicing characteristics of the smaller Tillotson carburetors that have been in use throughout the world for several years. 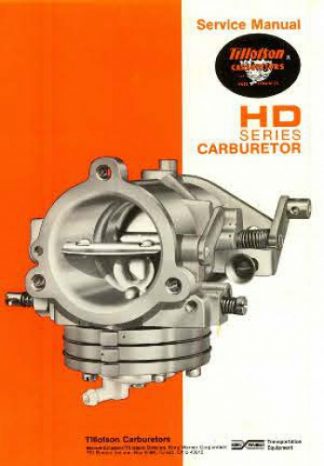