Only 1 left in stock

The drivers and the politics of Formula One frequently draw the main headlines, but there is no other branch of motorsport in which the technology reaches such an elevated level. Teams invest millions and designers spend their waking moments in an incessant search for vital fractions
of a second. No matter how much the governing body changes the rules, these ingenious characters always seem to find a way to go faster, year after year.

This insightful book unravels the mysteries of Grand Prix car design at the turn of the 21st century. Drawing on information gleaned from the sport’s leading design engineers, the authoritative, extensively illustrated text, written with the armchair enthusiast in mind, explains just how the modem Formula One car works, and how it has evolved.

Without becoming esoteric or losing the attention of the layman enthusiast, the author works through each section of the car explaining the factors at work in each particular area, and outlining how designers cope with, and exploit, those forces they encounter.

The philosophy, technology and materials behind the aerodynamics, chassis, engine, transmission, electronics, steering, suspension, brakes and tyres are carefully analysed, together with the unseen but crucial question of how all the myriad parts and systems interact and are honed into the sort of stunning reliability that saw World Champion Michael Schumacher complete two seasons of racing without a single mechanical retirement.

This background information became all the more important when in April 2004 the FIA outlined its determination to create a dramatic new Formula One in which fresh limitations on technology would be imposed.

Check out these The Science of Formula products from our partner websites. 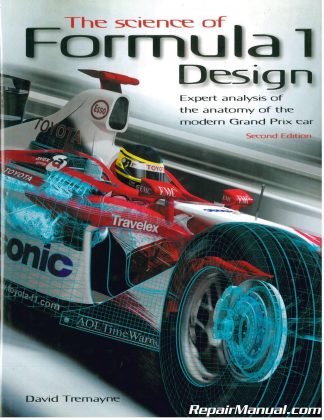 You're viewing: The Science of Formula 1 Design Second Edition $47.00
Add to cart