This 200 page, Oliver 70 Tractor Parts Manual contains a complete list of parts for the Oliver 70 Series of Tractors, the Row Crop “70” Tractor, the Standard “70” Tractor and the Industrial 70 Tractor.

This Oliver 70 Tractor Parts Manual is divided into groups or units corresponding to their function in the tractor. Each group or unit of parts are illustrated by an “exploded view” which shows the position of each part in relationship to the other parts. In each group, part numbers are listed in numerical order with the reference numbers also in numerical order. A complete description of the part, quantity used, and serial numbers are shown opposite the part number.

1. ILLUSTRATIONS – An exploded view of each unit shows the Individual parts clearly and In their normal relationship to one another. Reference numbers are only shown in the exploded view and these numbers correspond to those in the reference number column iIn the part group listing.

3. PART NAME OR DESCRIPTION – Each part is described by the function it performs in the particular group it is listed. The subject of the description is shown first in large bold type followed by the balance of the complete description. If another part will work or interchange:the part is so shown. Parts are described as “Regular” to designate them from special parts that have the same basic number. The special parts are described for the particular special feature tractor they are used. Hardware parts “S” numbers are listed in the description column under the parts they are used.

5. SERIAL NUMBERS – The starting serial number of each model is shown and if part is not now used the stopping serial number is shown. Part may not be used on all tractors as shown by serial numbers due to part being used in a sales extra unit or special modification of the tractor.

6. DETAIL OF ASSEMBLIES. The prefix letter “S” (second letter in part numbers) identifies an assembly of parts that may be a partial or complete assembly. The assembly part numbers are listed in numerical order beginning on Page 164 which- lists the parts comprising each assembly. However, assemblies consisting or only two or three parts are covered in the nomenclature of the assemblies in the group listing or parts. Some assemblies identified with assembly prefix letter S are supplied only in assemblies due to method of factory fabrication so to simplify the Parts Book only the assembly part number is listed but it is not described in the part name as an assembly.

7. HARDWARE PARTS – Hardware parts “S” prefix part numbers are listed with the parts they are used. To eliminate duplicating of listing hardware parts on modifications or the same basic part number, they are sometimes shown only under one part. A numerical- listing of hardware parts begins on Page 171. See Page 175 for various tube fittings used. 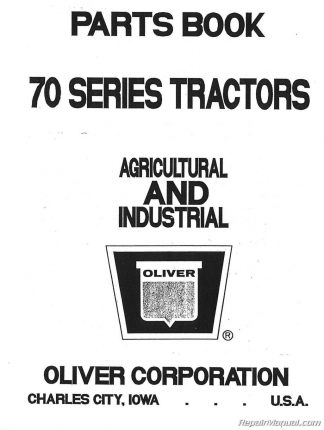